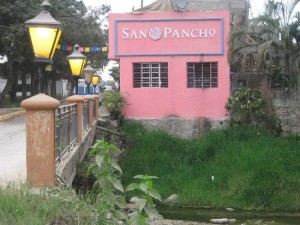 When my mom was alive, she would spend time in a little Mexican town known as San Pancho. On the map, it’s called San Francisco, but everyone who knows it, knows it as San Pancho.

It’s a small, quiet village about an hour north of Puerto Vallarta. It has good music, great art, but even though a good number of ex-pats call it home, it’s not a tourist town. My Dad thought he might stay there for the winter, and since, we saved some of her ashes knowing that she would have wanted to spend eternity there, I agreed to drive down with my dad and my sister would fly down there for a weekend.

Dad and I loaded up the car, and hit the road on a journey that would take us about 6 days. We left Denver and headed south to Nogales. I wasn’t really sure what to expect. Would there be armed officials? inspections? Not at all. Crossing the border into Mexico was so easy, we could have done it by accident. Even on the American side of the border, Nogales felt like Mexico, but once we crossed over, the city was alive with pedestrians, stores, and street vendors. Unfortunately, we didn’t know what to do next. I knew we needed to stop by immigration and get a permit for our car, but there were no signs. No arrows pointing us where to go. So, we ask a man who was hawking wares to tourists. He helps us park and walks us into the immigration office for a tip.

Next stop, a permit for the car. We’re told the office is at Km 25. That doesn’t mean much to us, but we hit the road and try to find our way out of town. There is no Km 25, so I think we probably won’t be getting a permit. 10 miles or so out of town, we’re passing what looks like an official building, when I realize, “That’s it!” I’m relieved that we are now officially official. Although I suspect we could have driven all the way through Mexico, and they’d never know we were there.

And we are on our way. Heading out, my biggest concern was safety, but I can honestly say that I never felt unsafe at anytime. Traveling is hard. Not speaking the language is hard. And I am extremely grateful that every Mexican we interacted with was patient and gracious with us. At times, they even drew us maps, because we could not understand a word of Spanish.

Our road trip love affair with tacos began in Arizona. And along the way, it’s almost all we ate. There were plenty of Al Pastor and Carne Asada tacos, but there were also tacos that I couldn’t even tell you what they were. Oh, and there were the crickets. Yes, I ate a cricket taco, and it wasn’t bad. Mostly it was crunchy and salty. It’s a fact that insects are a cheap and environmentally friendly source of protein and nutrition, and I believe that someday, we’ll all be eating insects. And if you’re going to do it, I think covered in spicy salsa is the way to go.

We stop for the night in a little known resort town of San Carlos. Dad swam in the Gulf of California, and we drank kick ass margaritas. 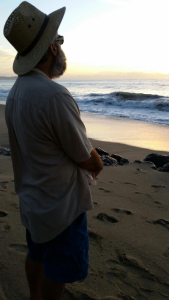 Driving through Mexico is crazy. The landscape gradually changes from dessert to scrubby trees to jungle, and it is all absolutely beautiful. Our route takes us through dozens of small towns. When the highway approaches these towns, large speed bumps force you to slow down, and at these slow points, men and women walk up to the car selling drinks and food. On the way out of town, we regain speed, passing pedestrians and families on scooters. It strikes me as incredibly dangerous, and I wonder how many are injured or killed on these roads.

We’ve been told not to drive at night in Mexico. Mostly, it’s because it’s not uncommon for livestock to wander onto the highway at night, and since there are no lights, it can be very dangerous. So, as it gets dark, the city of Culiacan is our destination. Unfortunately, it’s already dark as we arrive, and it’s a big city. It’s a big city with extra crazy driving. I know my guardian angels were in their football gear throwing shoulders to keep us safe. There aren’t always stop lights to help cars cross the road, so cars just start to edge their way out and cross the street if there’s enough room. It felt like driving on intuition. Can you figure out who is going to stop and who isn’t? And you have to be quick enough on your toes to stop or turn as needed. 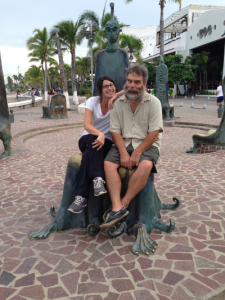 Theoretically, we can arrive in Puerto Vallarta tonight, but it’s the city that never seems to get any closer. We’re following google maps, and it takes us off the highway, through a tiny little town, up a mountain road that curves and winds up and then on the way down, it turns to dirt. I admit it. I start to flip out. There is no way we’re taking this road to Puerto Vallarta. Certainly not tonight. If the road is like this the entire way, it’s going to take us 5 hours, and it’s already 4. I’m not driving this!

We decide to turn around and spend the night in Tepic. We need gas, cash, and a mental break. It turned out to be one of our best stops. The downtown is vibrant and alive. We pull into the Real Don Juan Hotel right off the main plaza. It’s old, romantic, and luxurious. We walk around the town listening to the political speeches being given in front of the palace, we watch the Day of the Dead dancers, and visit the old church where the bells are still rung by hand. 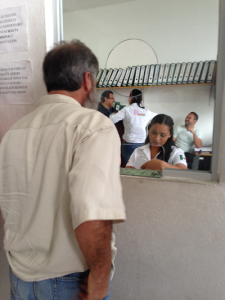 PV or bust! We decide to take the long road and avoid the mountainous route. But first.. a ticket! For not wearing his seat belt! I told Dad this was his guardian angels way of saying, “Hey, I’m doing my best here, but you gotta do your part.”

The cop takes his license, and we can get it back when we pay the fine at the local transportation office. This is easier said than done. We spend the next hour looking for the transportation office. We drive, we stop and show the ticket to a local asking where the office is. He or she will point, and we drive more. Then stop. Ask. Turn Around. Ask. Finally, the ticket is paid and the license returned. 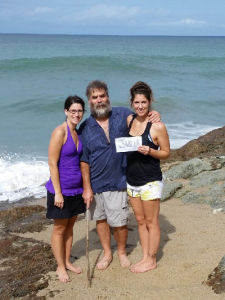 It’s been a wonderful experience so far, but we are also here on serious business. We pick up my sister at the airport, and we head to San Pancho. That morning, we are treated to a double complete rainbow over the ocean. It was like mom was saying, “Welcome to San Pancho.”

That sunset, we read, “Do Not Stand At My Grave And Weep” and we each had our own special, private moment of goodbye. We played The Parting Glass, and opened a beer. Sitting in the evening light, we talked and shared stories about mom. We talked about the kind of person she was and how her drive took her so far in life. We talked about her heart and how she cared so much for others. After a while, we walked back into town for dinner. Tacos, of course!

Experience Of A Lifetime 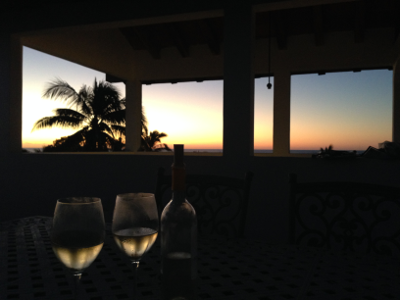 This was the experience of a lifetime for me. I know that for the rest of my life, I’ll think back and say, “Remember when Dad and I drove to Mexico?” Don’t be too jealous of my dad, even though this will be his view for the next 4 months. In February, we’ll get to have this experience all over again– in reverse!

Do you have an experience you’ve shared with a parent that you treasure? I’d love to hear about it in a comment below.